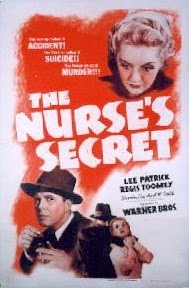 The Nurse’s Secret (1941) is definitely at the B level but is still worth 65 minutes of your viewing time. It’s a fairly faithful remake of Miss Pinkerton (1932), which was based upon an eponymous novel by Mary Roberts Rinehart. Pretty young Nurse Adams is assigned to special duty at an old decaying mansion. The elderly matriarch’s spendthrift son has blown his brains out, we are told, and the matriarch discovered his body and promptly had a “severe nervous shock”, so requires full-time nursing. The nurse’s boyfriend, police Inspector Patten, asks her to investigate on his behalf. Well, the matron is acting strange, but then so is the butler, and the butler’s wife, and and the dead guy’s girlfriend, and the guy who lives across the street. And it looks more and more likely as if the verdict of accident upon which the matriarch is insisting isn’t all that believable after all. Nurse Adams gets dangerously close to being accused of the second crime before she and her boyfriend sort it all out and Inspector Patten applies the handcuffs.

The earlier film stars Joan Blondell and George Brent at the top of their respective games; this film stars Lee Patrick as Nurse Adams and Regis Toomey as her boyfriend from Homicide.  You may never have heard of Lee Patrick, whom I see as a hard-working woman at the second rank of stardom (or lower). Her most memorable role was earlier in 1941; she plays the small but memorable role of Sam Spade‘s secretary Effie Perrine in The Maltese Falcon. She’s more of a character actor than a glamorous lead. This might actually be her only starring role in a film (although if someone knows differently, I’d appreciate being informed). The unsubstantiated story is that her husband, a writer for magazines, did an unflattering piece on gossipeuse Louella Parsons and Lee Patrick’s career suffered forever as a result. 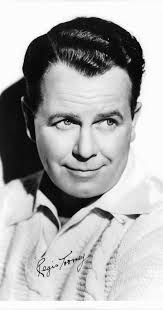 It’s amusing to watch Miss Pinkerton and then The Nurse’s Secret one after the other because you get to see clearly what it is that makes a B a B. Lee Patrick’s salary was probably a tenth of what Joan Blondell earned for the same role. Patrick has a certain quality of hardness that Blondell only approaches; hard to explain, but you get the feeling that where Blondell might utter a racy wisecrack, Patrick would — away from the microphones — rip off a string of unprintable curses. This isn’t based on anything except my feeling about the two of them, but Blondell certainly turned out to have more widespread popularity and hence staying power. George Brent and Regis Toomey are roughly equal as the two hard-nosed cops. Everything in the B version is less expensive, and less well chosen, and just generally cheaper; sets, costumes, and the quality of everyone and everything in each film. The first film features a creepy old mansion; the second film features a not very creepy old mansion with some weird daytime lighting effects of random shadows that can’t be caused by anything imaginable. Miss Pinkerton builds tension and sustains it; The Nurse’s Secret doesn’t manage to build tension for very long before it dissipates it with ugly lighting, a noodly-doodly music score and a poorly-chosen supporting cast.

The only high point in The Nurse’s Secret is the actor playing the elderly matriarch, Clara Blandick. I first noticed her chewing the scenery in a small but significant role in Philo Vance Returns (1947), but I later started seeing her in everything everywhere; you know how that goes. Once you recognize a character actor’s face you can’t imagine how you ever missed her before. She played Auntie Em in The Wizard of Oz; and generally played in 100+ films, frequently made up to be older than she actually was. And my audience of mystery fans may remember her in a tiny role in the 1936 Perry Mason production, The Case of the Velvet Claws; she plays Judge Mary at night court who marries Perry to Della Street just before the honeymoon is ruined by a murder.

As I’ve said, there’s nothing here that you haven’t seen somewhat better written and more expensively portrayed in the earlier film. But if you’re like me and enjoy seeing the first-hand effects of turning an A film into a B production, this will amuse you. And if you haven’t managed to see Miss Pinkerton, it will whet your appetite for something more solid!